For booking enquires on this course please complete our contact us page, available prices can be viewed below.
The minimum booking we can make is for 2 golfers and 4 rounds in total. We are sorry but we cannot accept single golfer bookings.
Because of the time required for us to book your tee times with the golf courses and then confirm those tee times with you, we need a minimum of 48 hours from the time of your booking request till your first tee times Tee time bookings made by you over the weekend require longer notice, and the earliest tee time for a booking made on a Saturday or Sunday would be the following Wednesday 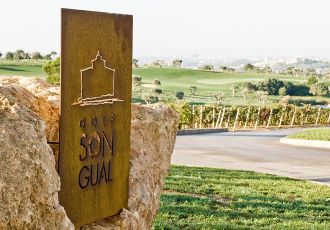 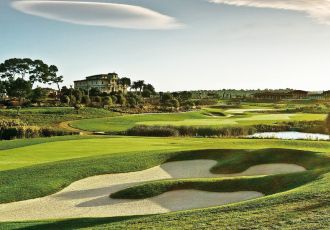 To be in an oasis of calm like Son Gual, less than 30 minutes after collecting your luggage at Palma airport amounts to pure golfing bliss.

What’s more, your appetite will have been whetted during your landing approach, as Son Gual, Mallorca’s number one golf destination, is clearly visible out of the left-side windows of the aircraft.

You will have seen one of Europe’s top courses. You’ll have glimpsed large lakes, 66 bunkers, 800 olive trees – some more than a thousand years old – wild flowers in the rough and vineyards in several areas around the course.

But you’ll need to stand on the clubhouse terrace, at least, to fully appreciate the beauty and sheer playability of this Thomas Himmel-designed masterpiece.

In ranking it as number 42 in Europe, Golf World also established the track as Spain’s eighth best and the top course in Mallorca, stating: “Mallorca’s No1 is the epitome of a high-calibre modern championship course.”

Son Gual – which celebrated its 10th anniversary in 2017 – possesses several outstanding holes which will linger long in the memory, including a closing hole described by one reviewer as a “serious contender for Europe’s best par-five and Spain’s most dramatic 18th”. High praise indeed.

And even some of the world’s best golfers have been known to eulogise. Former Ryder Cup captain Ian Woosnam said: “It’s a bit like Augusta. There are a lot of slopes on the greens. You’ve got to get the ball on the right side of the hole – if you don’t you’ll be struggling. Miss it on the wrong side and you’re dead.”

Just don’t be surprised if you bump into a famous face enjoying the clubhouse hospitality – Rafael Nadal is among many regular celebrity visitors.